My Witchhazel is Flowering 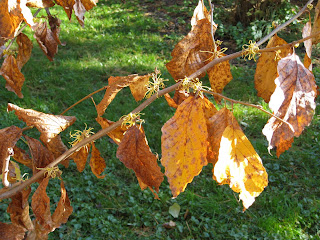 I thought she had abandoned me because I had not seen her flower in the last few seasons.

I kept an eye on her last year, but it is possible I missed it..... seeing as I had a newborn baby and a kitchen renovation happening at the same time, but that was an adventure for another posting. 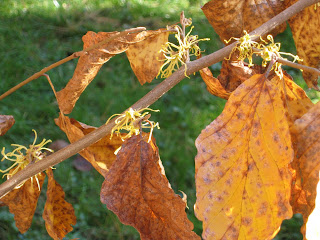 But she has not forsaken me!!!!

It might seem silly to an outside observer, my emotional attachment to my witch hazel tree. While I am a closet plant geek, (remembering the names of far more plants than people), my affection for my witch hazel has a deeper significance.

Finance guy and I bought this tree while living at our old house, Mothers Day weekend 2003. We found out two days earlier, when going in for a check up very early on in our third pregnancy that the baby, no longer had a heart beat. We had two beautiful children. We were taken by surprise at how deeply the loss affected us. We planted our witch hazel tree a few weeks later, in memory of the baby that would never be.

Because of her symbolism, when we moved to "Shirley Manor" in the fall of 2003, we dug up our witch hazel tree and planted her in our new yard. Of course, once we ripped out years of undergrowth and wisteria (unaffectionately known as the mother weed) we moved her again!

Like a hearty little beacon of hope my witch hazel survived and flourished.

The really wonderful thing about witch hazel is that she flowers in November.....right around the time the baby would have been born.

It wasn't long after we moved into "Shirley Manor" that our second daughter's growth became delayed and her health began to decline. We were equally unprepared for the two year journey that lay ahead to find a diagnosis.

The first year that witch hazel flowered, I cried, but as the years have passed I have come to look forward to witch hazel flowering. The flowers in their strange alien form remind me of the greater wisdom that was at play when I lost that baby. Somehow she knew how completely her big sister would need us.

Now when I see my witch hazel flower...there is still some sadness...but a larger sense of gratitude for one unborn baby's gift to the sister she never knew... 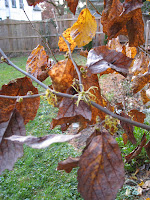 
Posted by humblemumblings at 2:15 PM