April Showers or When it Rains it Pours/Snows? 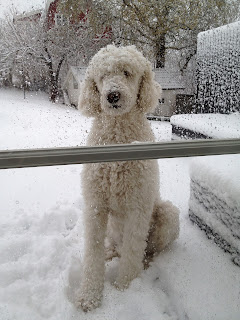 Sometimes it feels like my life is some kind of dramatic saga, that I have unwittingly been cast in.  I know that it isn't true, because I'm not seeing any royalties check in my Swedish mailbox, but I continue to play the part, because despite my best effort at change, a new script has not come my way yet.

In February Finance Guy was put in charge of the business in Sweden that he had up till then just been overseeing.  This gives him some great international business experience.  Unfortunately as most people will attest when starting a new job the time demands tend to be great.  Add to that being the only foreigner in an all Swedish office, and balancing the needs of his bosses in the states (who are 6 work day hours behind us,) and you've got yourself a husband who is traveling, and working some long hours.

Right around the same time in February, we learned that Finance Guy's Father had tumors on his pancreas. I'm not going to say much about this.  Having been through incurable cancer with my own Dad, I know a little to well the twists and turns in the road ahead.  Finance Guy's Family are praying for a cure.  I'm praying for a long road, without pain, and good days that will stick in our memories far longer than the darker ones.  I pray for my Father in law to be surrounded by love for whatever time we are lucky enough to have.  Speaking of lucky, Finance Guy has been able to attend meetings for work stateside, and tag on some weekend visits with his parents for the last two months.  Time is one of the greatest gifts.  It's right up there with, babies, ice cream and laughter, (Muppet Movie).

The alleged piliomatrixoma on the teens face, was determined, after visiting the  Husläkare at Lidingö Sjukhus, the Dermatoligist at Danderyd Sjukhus, and the Plastic Surgeon at Karolinska Sjukjus, to be nothing more than some stubborn scar tissue!  Yay!  Even better, I now know the three major hospitals, the 24 hour ER,  and which bus and train lines drop me to their front doors.  Very handy information to have when raising three children.
While Finance Guy has been busy with everything on his plate, there has been no shortage of fun dramas that only a Teen, a Tween, and a Preschooler can provide.  Jealous girlfriends, best friend break ups, and with half the parental unit absent, a wonderful flare up of adjustment issues expat style.

Because of the flu and Spring Break, KC missed about three straight weeks of  Förskola (preschool).  Funny part was, that during this time, she was more herself than she has been since we moved to Sweden.  After one day back at förskola, and the return of her diva moods, I had to face what I suspected, but was trying to ignore.  Swedish school was not working for her.  This past week was her fourth week home and about two days into it, I called, and spoke to her teacher.  Being in a class with only Swedish speaking children was just too much for her.  She is too verbal, and too in tune to the subtleties of interpersonal communications to not be understood, and understand the other children.  So she is home full time, probably till August.

So what about me? Well next week I finish my Swedish for beginners class.  I'm understanding much more of the Swedish world around me, and can manage very basic communications.  I have searched for a yoga class, and dance studio for some mental health breaks, but since most women my age work during the day in Sweden, most of the classes that I could find are directed towards pregnant woman, new mothers, and retirees.  This is all just as well, because with KC home full time I wouldn't be able to go anyway.  There are classes on nights and weekends, but with Finance Guy gone those aren't feasible either.  So, I'm also battling some serious caregiver fatigue.

By mid-March I came to the dazzling realization that while I courageously severed myself from my over worked caregivers life in Pennsylvania,  I'll be damned if the bitch didn't follow me!  I have to shake my head and laugh. Part of me really thought changing locations, would somehow change the realities of my life. All I really succeeded in doing was to cut my life lines to my support system that took me years to build.  John Kabot-Zinn wrote an entire book of mindfulness meditation, warning of this mental trap, and I still stepped blindly into it.  "Wherever You go, There You Are."  I'll be scraping this one off my shoe for a while.

My current mental state,  feels a lot like when I was 19 and my parents moved from my childhood home in New York, to their first home in Florida.  My two older brothers, not yet independent, went with them.  I stood in my driveway and watched the moving van, my parents, and my two brothers pull off and with the few possessions from my childhood that they hadn't sold off while I was away at college.  I wasn't going with them.  I was left with a shiny new car, that I'm pretty sure was bought with their guilt, and a broom.  My parents didn't see the sense in paying a cleaning service when I was quite capable of sweeping up and cleaning the bathrooms.  I didn't mind, it was the least I could do for the home that held all childhood memories.   It felt right, to be the last one in my family to take care of her before the renters occupied her rooms. Like the bathing, and anointing of a body with oil before it's buried, going through the ritual, that provides purpose while you numbly try to imagine daily life after.  You can't see how, but you know life will go on.

So I sit with my computer, on another, cold freezing-rain night, and try to imagine the warmth, and colors of a Swedish Spring.  A promise that has been painfully slow in coming.  Since this is my first Spring in Sweden,  I have no idea what it will look like when it comes, but I continue to get up each day, and search for signs of it.
At this point, it's probably a good idea to stop holding my breath for the shiny new script of my life to arrive.  Time to take some deep mindful breaths filled with the life that surrounds me, and meditate on what it is, instead of what I want it to be.  Yeah. That will last about 30 seconds. But it is a good time to remind myself that life isn't pre-scripted.  Maybe I can't control all the scenes, but the words I speak, and the roles I play, are mine to choose. 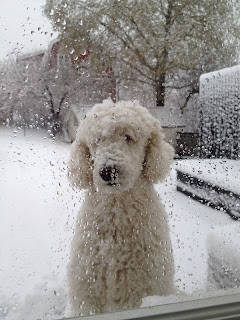 Don't worry, about the sad wet dog.  We took the pictures and then let him in.

Posted by humblemumblings at 6:18 PM