After our bike ride to visit the Walpurgis Ashes, the Teen and I went into Stockholm to do some bathing suit shopping.  Seems a little early,  but they have been in the stores for a month or so, and in Sweden they only order so many in each size and when they sell out, they are gone.

Sweden, (and much of Europe), is a little different when it comes to the swim wear they choose.  I had been to three different stores scouting out where I might find some options so when we did get a chance to shop we could do it efficiently.  The Teen of course was lobbying for her first bikini, and I was ok with that.  After a couple stores I started to realize that most of  the bathing suits were not just two piece, but full on bikinis.  In fact I would estimate the bikini-to-one piece ration to be 25 to 1.  Also I saw women of all shapes and ages checking out the bikinis.  Women with babies, women with wrinkles, women whom I am pretty sure that while they were not overweight, were also not hitting the gym everyday.  Sexy bikinis.  Bikinis that only 20 somethings where in the states...

I tried to imagine what the scene at the local pool will be like this Summer. Then I tried to imagine the same scene (with similar bikinis) at my American pool.  In the states only my fittest, and most athletic friends donned a bikini after motherhood.  I myself initially traded my bikini in for something easy to nurse in.  From there I graduated to something that wouldn't fall down, when terrified toddlers clung to me, or that I wouldn't fall out of as I bent over to pick those same toddlers up.  Really no sense flashing the innocent masses. Three pregnancies and labors meant this woman's belly button hadn't seen the light of day in a decade. In the States, motherhood seems to brings modesty.

Apparently that doesn't factor in quite the same in Sweden.

So you're probably saying 'Karen, what does all this have to do with Labor Day in Sweden?', and are wondering when I am going to show you pictures of Swedish women in bikinis.

'Well,' I say, 'no pictures of bikinis...yet, but heres a little something about our Labor Day.'

After we were done shopping we headed back to T-Centralen to catch the train home.  We came upon a large number of Police officers outside the Gallerian.  So many that I almost took a picture, but they seemed a little serious, so I refrained. You don't usually see police when you are walking around Stockholm.  Here there was at least 3 police cars, two police vans, and about 15 officers.  It was not a typical scene.

As walked past the police and through the archway that led to Sergel's Torg this is what we came upon... 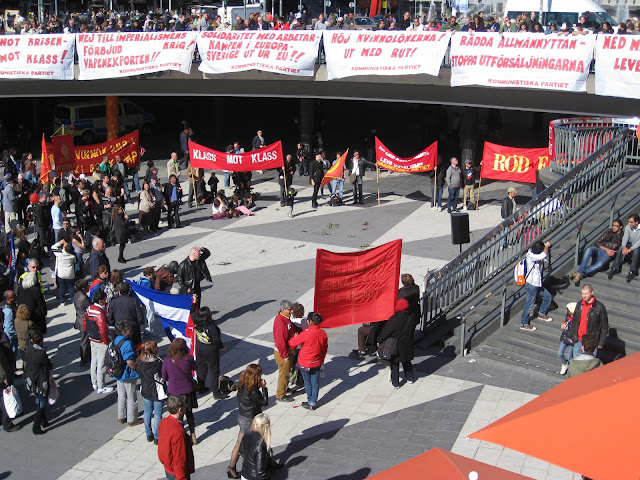 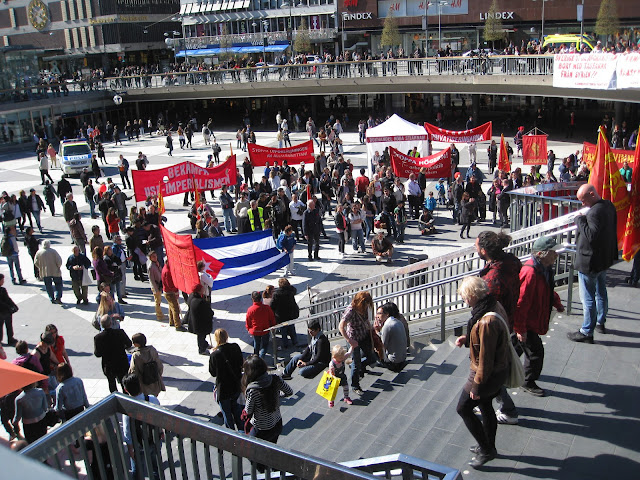 There was music, a band I think, and people seemed to be listening, milling about, or looking on with curiosity.  So the Teen and I fell in with the last group for a bit.  I began trying to understand the banners that were posted around the plaza. 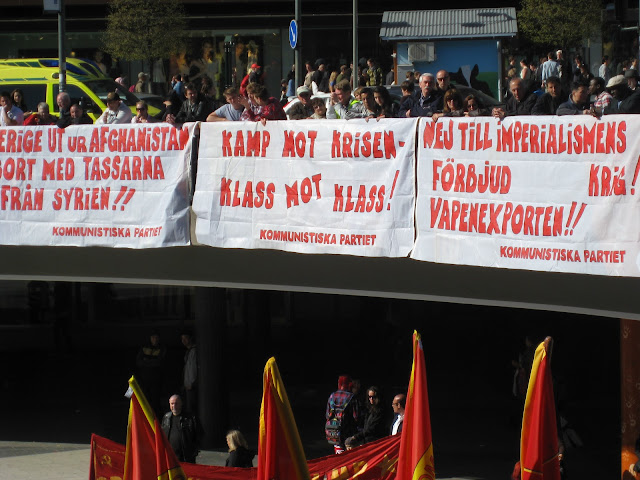 I wasn't sure about many of the words, but I was pretty sure I knew that Kommunistiska Partiet translated into...'Communist Party' 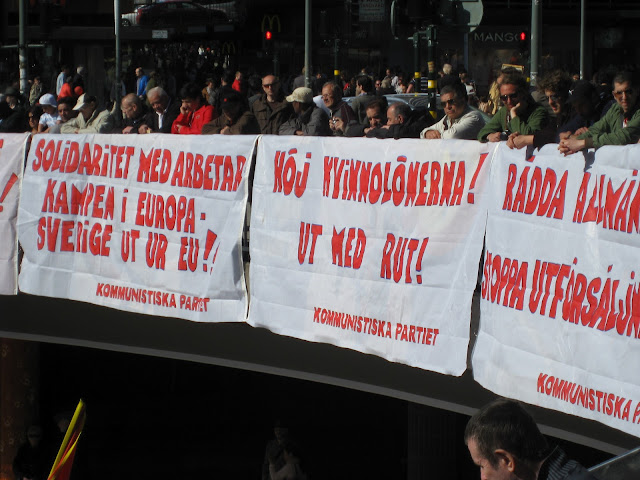 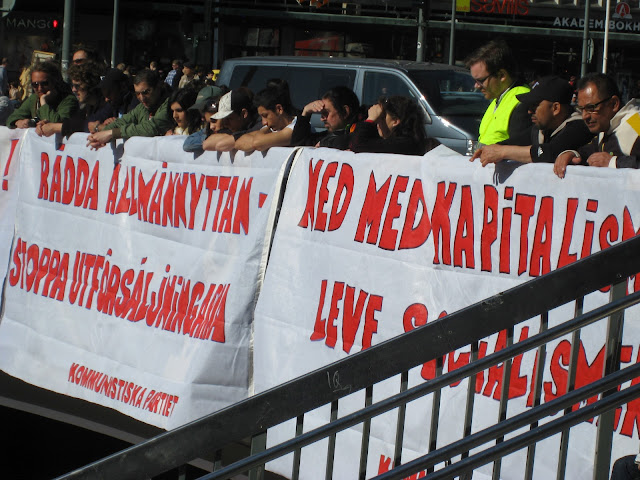 So now I at least had a clue. I told the Teen, 'Oh, it's a Communist Party demonstration.'  To which she said anxiously, 'What's the Communist Party?'

It took a moment to absorb that my 13 year old, had no concept of Communism.  It took even more moments and memory gymnastics to formulate a response.  It had been years since I had thought about it.  USSR, North Korea, East Berlin, but that wasn't communism per se.  I began to sort through my own ideas of Communism trying to steer clear of blatant negative stereotypes to find the most innocuous, and basic concept, to answer my daughter in my American English, not certain who might be listening and judging my response.   Marxism, ooh, I had a vague recollection of reading about Karl Marx in High School, and thinking that his theories weren't all bad.  He made some very salient points...but what were they?

I scraped together a four sentence response.  'The basis of Communism is that everything is owned by everybody.'  Yes I know, way over simplistic, if not all together wrong.  'It is hard to explain, because the theory, and how it plays out in reality, can be very different.  In many communist countries there is such a tight control over resources that it becomes difficult to get more than basic needs.  Sometimes if the leader becomes more of a dictator, it can be a very oppressive system to live under.'  This seemed to satisfy her. 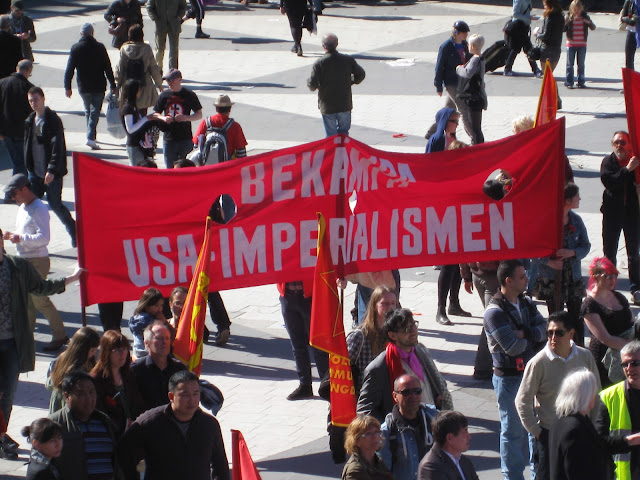 My nervousness about not fully understanding the scene around me got the best of me, and I said 'I didn't know we were Imperialist? Hey, how about we go down there and introduce ourselves as American Imperialist!?'  Surprisingly, the Teen was not amused, and declined.

We still hadn't figured out how the troop of police, a block away were going to factor in to what appeared to me, to be a peaceful showing of solidarity.  I wondered if they knew something we didn't.  The weight of the shopping bags in my hand began to grow self conscious of our shopping bags, and the vulnerability of my child in a situation I couldn't read the subtle signs of.  Time for us to move along.

After we got home, Finance Guy informed us that labor party protests, and marches were very common on Labor Day in Sweden.  Up until recent years they usually occurred during a parade that the King had around the royal palace.  Unfortunately the protesters had grown so numerous and rowdy that they no longer had the parades, and the demonstrations moved to other parts of the city.

Well that would have been nice to know.

Labor Day in the States, is incredibly innocuous and is more about the last weekend of Summer,  celebrated with barbecuing, or relaxing at the beach, than labor.  I guess that does,  make us look a little disrespectful of the plight of the workers...but  imperialist?

Now that I mentioned the beach, you're probably wondering, how our bathing suit shopping went.

Quite well thanks. In the states I have a lot of trouble finding suits small enough for my frame and end up buying whatever one fits, without making me look like a total schoolmarm. Because there was such a vast selection of bikinis here, I found not one, but TWO that looked way to good not buy.

I'm no fool, I know my Summers looking acceptable in a bikini are numbered. So this Summer, my middle aged body will be offering up her belly button to the Swedish sun Gods as a humble offering.  Hopefully they will forgive me for celebrating my first Swedish Labor day, in such and American fashion.

Posted by humblemumblings at 5:19 PM