We are coming off a lovely four day weekend, that left us feeling like we had an entire week off. Finance Guy was home all weekend, and while he did work one of the days it was a treat to have him around for some relaxing family time. Since I so thoroughly enjoyed my weekend, I thought I would share some of the fun with you all, to help you through your American Hump Day!

Saturday we were invited to a House Warming Party.  It's not unusual for an expat family to have to move during their assignment, especially if a contract gets extended. For instance we have a two year lease on our Swedish Dream House, but will be in Sweden for three years.  So if our landlords don't extend their contract abroad, this time next year we will be looking for a new place to live.

Our friends who threw the party are American, but because they have lived in Sweden for two years, they have friends who are Swedish, Polish, German, Italian and more, so it was a very interesting mix of people.  The party started at 5, and the teen was spending the night so the three of us, (Beanie the teen and myself) arrived not long after that with our slab of meat to throw on the grill and a bottle of wine.  Finance Guy stayed home with KC since she doesn't 'play well with others' after 6pm.

Beanie and I enjoyed the scene for a while, but at about 8:15 decided to call it an evening.  As we were putting on our shoes and coats to leave, one of their Swedish friends, who had just arrived, presented our host with a traditional Swedish house warming gift.  This.... 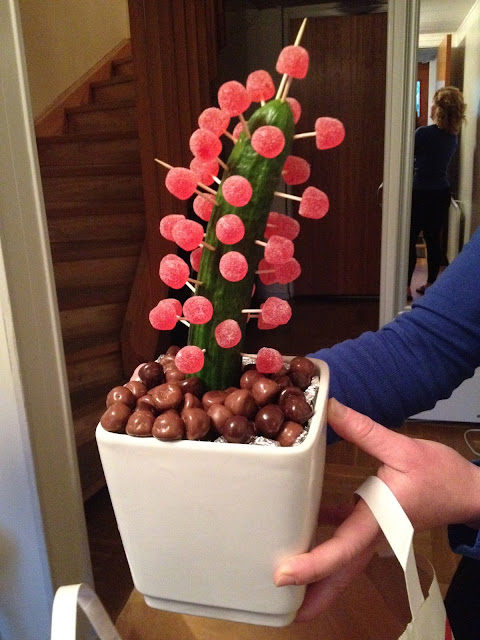 So what you are looking at is, a simple flower pot, filled with candy, and erect cucumber stuck with toothpicks and gumdrops.  Hmmmm.

I tried Google to get more information about this particular tradition, its history and meaning, but alas came up with nothing.  So of course, this leaves me to interpret this little slice of Sweden through my American eyes, (something I do quite often, and usually erroneously).

Ahem...upon first viewing of the House Warming Gift, both Beanie and I were filled with surprise, and pleasure at the artful, and colorful display of candy.  Emotions both warm, and fuzzy filled us, and it was hard not to smile.  It's simplicity was disarming.  Since we couldn't verify the gluten content of the candy, we did not sample it, but I think it was intended to be eaten, and shared.

As to it's symbolism? The candy clearly represented 'sweetness' with an abundance to partake with friends.  It being presented in a way that mimicked a potted plant, I would guess, represents that the new home be somewhere for 'life', and 'growing' or to 'put down roots'. It was hard to ignore the phallic imagery of the gift, (a fact that was thankfully lost on my 10 year old companion)...and to that I can only extrapolate a message of 'fertility'?

If any of my friends, who are more well versed, with Sweden, have experience, or perhaps, some more educated thoughts please, PLEASE, leave a comment.  Not understanding the meaning of this gift, and how it became a tradition, is torture for this curious cat.

My friend informed me that after we left, the number of party goers tripled as their Swedish guests arrived.  Around 11, the snaps came out and the singing began.  This lasted till 2 when the entire party of revelers moved outside, and toward the Tunnelbanna station.

I have read, and heard stories, of snaps and Swedes, but have yet to see it myself.  It apparently only happens after I've gone to bed, but this is what I have heard...sitting around a table, glasses in hand, the host makes eye contact with each guest then, "Skål".  Everyone takes a sip, eye contact again, the glasses are set down. Pour and repeat. Sometimes, in warmer weather, this is followed by a procession to the nearest body of water and skinny dipping.

As I yawned, and longed for my flannel pajamas on the train ride home, it became clear, that 3 children, and 4 decades has put the party girl in me, to rest.  After 8pm she is as dead as a doorknob.  I am determined however that at some point I will heavily caffeinate myself to experience the Swedish Snaps tradition at least once while I am here.  I'm not sure about the naked swimming part.

So many traditions...so little time.

More from this past weekend later.
Karen
Posted by humblemumblings at 3:58 AM