Time to get back to the festivities from our long weekend.  Part of the fun of our 4 days last weekend, was that it was packed with 3 Swedish Holidays.  This year, Walpurgis Night falls on April 30, which is also the Kings Birthday, so along with Swedish flags being flown everywhere, there is the tradition of bonfires to look forward to at night.

The history of Walpurgis has it's roots in Viking times when it was believed that witches flew that night, returning from their dinner with the Devil.  I'm not certain if it's the dinner they were headed to at Easter time, but if so, that must have been some kind of party!  Sign me up.

Bonfires are lit throughout Europe during this time to prevent the witches from landing in the fields and ruining the soil before planting.  I have also read that the bonfire tradition was started because traditionally the farm animals were put out to free pasture, after a long winter, and bonfires and songs of the villagers helped to keep the predators  away.

Having missed out on the drunken Swedish revelry of the House Warming Party, I felt strongly that I wouldn't miss this right of Spring.  The teen, who unlike me, had not slept through the revelry two night earlier, chose to stay at home.  Finance Guy and I took advantage of the free babysitting, and left sleeping KC behind.  Beanie, could not be shaken off, so we let her come along.  She's a tough one to ditch.

It isn't uncommon for each community to have a bonfire.  The largest, most traditional one in Stockholm is at Skansen in Djurgården.  I had found an article in our local paper giving the times, and locations of the fires on our Island.  If my translation was correct,  there would one in our neighborhood.  If my translation was incorrect, we would still end up having a lovely walk with the smell of burning wood wafting through the air.  Spring evenings in Sweden can still get quite chilly, so we bundled up to take the short 200 meter/1/4 mile stroll to the park in our neighborhood.

When we arrived, we were pretty sure we were in the right place, because we found, this... 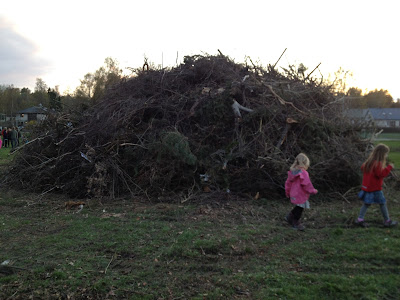 In the grass you could see the tire tracks from the vehicles that had deposited the kindling.  I began to realize that much of these branches were from the neighbors Spring clean up, and downed branches from the wet snow we had after Easter.  So practical these Swedes.  Being a  pragmatist by nature, I have a deep appreciation for this. 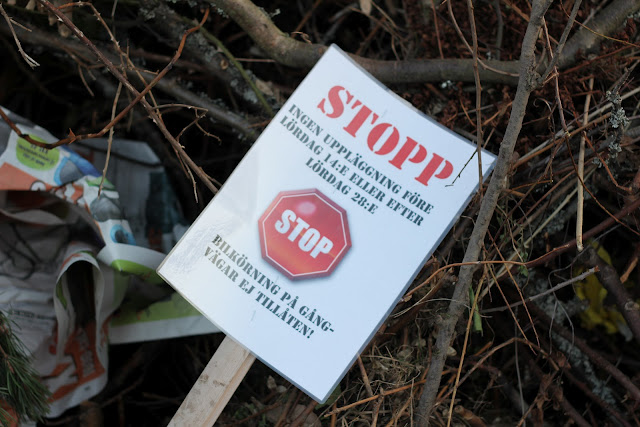 Google translate was less than helpful in finding the exact meaning of these little signs.  I think they are instructing people how, and when the brush could be dropped off.  I thought it was a little ironic to see them cast among the brush that was about to be set ablaze. Hence the photo share.

As dusk gathered around us, so did the people.  A Swedish woman's voice spoke over a loud speaker, and a choir standing under some white event tents, on the other side of the pile began to sing.  Neighbors greeted each other as children found their friends and began to size up the social scene.  Beanie looked at me and said."I feel, like so weird walking around with my parents instead of playing with kids my age."  To which I responded, "Yeah, imagine how I feel.  All the grown ups are chatting with peers, and I'm here talking to a 10 year old."  We agreed that in this situation, I was the bigger loser and laughed.

Sweden, for the most part is a very safety minded country.  For example, children stay in rear facing carseats till 40-50 pounds and 4-6 years of age. Often this is done in the front seat, after disabling the air bag.   By contrast in the states, most parents can barely make it to the1 year and 20 pounds law, before the child rides facing forward. Booster seats with backs then follow till at least age 10.  You won't find it in Swedish law though, it is common knowledge that these practices save children's lives.  So the retailers only stock the rear facing seats.

So I figured the bonfires would be carefully monitored by firemen, a firetruck, and hoses at the ready.  I imagined a roped off perimeter, carefully calculated based on the size of the brush pile  and prevailing headwinds.  A little safety ring so to speak. So I was a little surprised when we arrived to find no such predetermined ring or any firetrucks, or people in fire fighting gear.

I circled the brush pile and noticed something about 20 yards back in the grass.  This... 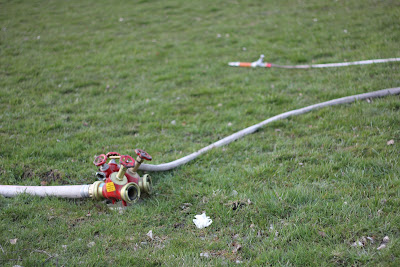 The other end ran towards the edge of the park and a water source at the street.  Whew.  My faith was renewed in the Swedish Safety ethic.

So as the choir sang on, small, rowdy, groups of children pulled at and repositioned branches on the brush pile.  None of the kids were maintaining what I thought was a safe relationship to the pile o' branches.  Yes, it wasn't lit yet, but it was huge and seething with combustable potential.  Finally this official looking gentleman arrive. 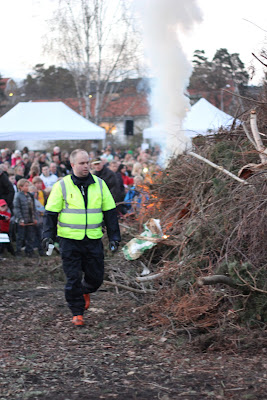 I knew he was official because he was the only one wearing a neon green shirt and vest. These are universal Swedish symbols of someone being safe.  He was also lighting the fire as he went.  Now that Fire Safety Man had arrived and the fire had been lit, I felt certain that a circle of safety would be established around the bonfire.  Instead this is what I saw. 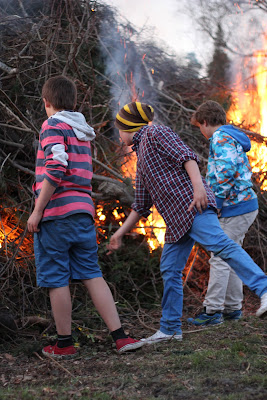 A group of youths rushed the burning pile of timber and began poking stick at it like a crazy bunch piros.  Pulling sticks out and jamming them back in adding ones that had previously been laying derelict just beyond the mound. What? You're not suppose to touch the Walpurgis fire!  It was like some prepubescent running of the bulls only with a stationary threat.  Each kid seemed to take his turn taunting the blaze in some way.  "What are they doing!?" Beanie asked.  I had no response, I was just as flummoxed. 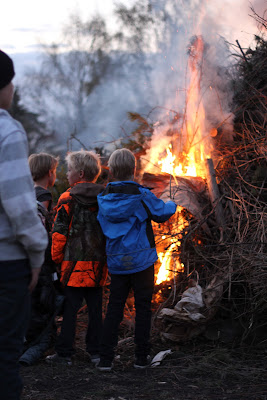 I did a visually scan of the area looking for some adults who might intervene.  Where had Fire Safety Man gone? What was the point of adorning yourself in the Neon Vest of Safety, if you weren't going to use the powers it conveys for the forces of good?  Some parents came up and pulled their preschoolers back from the heat, but most of the children stayed close to the pile. 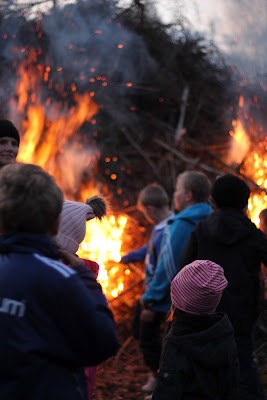 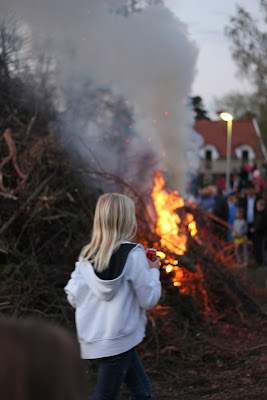 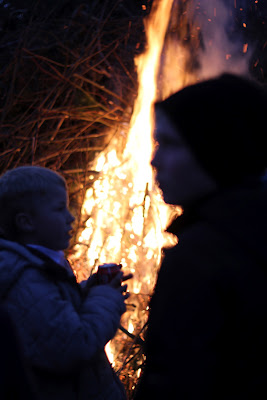 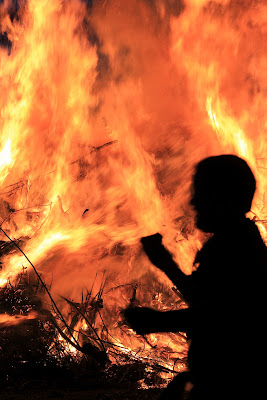 As the flames began to devour the pile, Finance Guy and I finally couldn't take it anymore and moved further back.  We might not be able to control the callow display, but we also didn't need a front row seat.  From our new vantage we could relax and enjoy the spectacle of the bonfire. 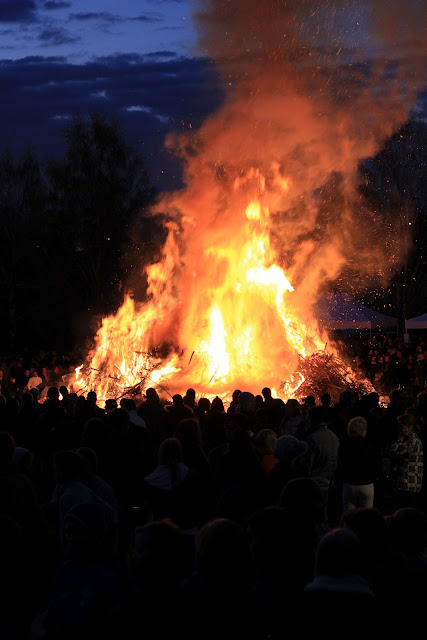 The next day we were curious and took a family to the site of the previous evenings events. This was what remained. 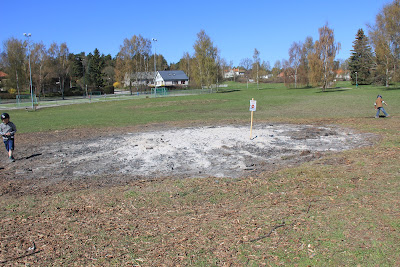 The large circle of ash was still smoldering in certain spots. 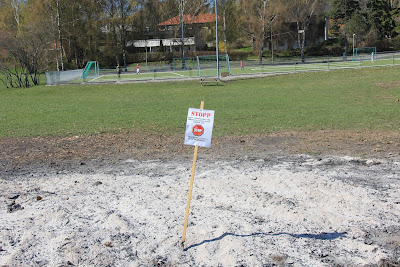 Look the sign miraculously survived the pyre!  It's a Walpurgis Miracle... 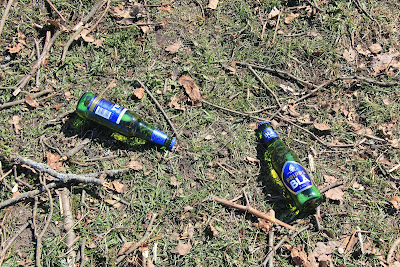 Uh oh.  Looks like somebody had trouble holding their beers...

I have been thinking about the Swedish, (which I often), and how their approach to safety can seem paradoxical. They are very conscientious about protecting children from major accidental injuries.  If there is a study showing that a safety measure (car seat, helmet, etc) can save children's lives they usually, without question take those actions.  No laws necessary.   However, that goes hand in hand with a parenting approach, that doesn't coddle.  Hiking, biking, climbing boulders, skating, skiing, are actively pursued from a very young age.  Skinned knees, hard falls, and yes, even learning how to safely deal with fire, are necessary life experiences. It's common sense: let the child develop confidence, and mastery, while reducing the risk of mortal danger.

There you have it.  Walpurgis Night, and a glimpse of Swedish pragmatism all wrapped into one flaming event.  I can't help but feel affection for them both.

Next up: Labor Day in Sweden

Posted by humblemumblings at 3:50 PM