As many of you know, I live on an island just outside the city of Stockholm.  It's a peaceful picturesque hills and fields are spotted with charming villas, sheep, and horses.  Even though we are little more than 10 miles from downtown Stockholm, we are for all intensive purposes living in the country. Usually when I drive the road that leads to my house, I pass more pets than people. 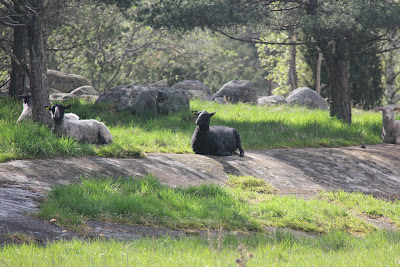 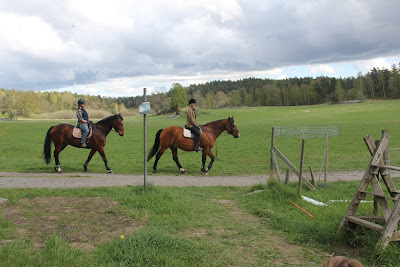 Or pets and people.

But hiking in the nature preserve near our house there are signs that hint to something more... 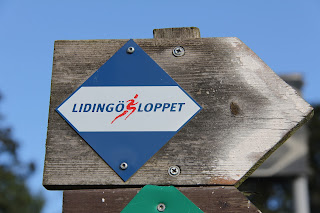 Every year, since 1965, for one weekend in the fall, our island's population of 43,000 nearly doubles with an international gathering of athletes of all levels and abilities, for the world's largest cross country race, the... 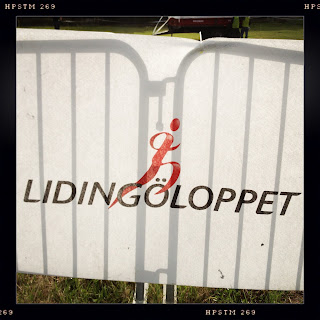 Festivities kick off on Friday and go all weekend.  There are 7 events in total, and all geared to different abilities.  The main race is the 30km 'classic' that runs on Saturday.  There is also a relay; geared to corporate groups, a LidingöRusset for individuals with special needs, a women only race, a nordic walking event, and it all wraps up on Sunday with races for the kids.The courses runs through woods and fields all over the island on dirt and gravel paths.

An aspect of this weekend that fascinates me, is that because of the she number of runners it is impossible to accommodate all of them  in hotels on our island.  However because the race is so well supported by all the commun's resources, open a number of the gymnasiums, (high schools) so that the runners will have a place to sleep the night before the race.  A fair number of those runner will find themselves sleeping on the floor in either a gym or classroom.  Just incase a 19 mile run through the woods on challenging terrain wasn't enough, they are willing to throw in the race eve challenge of sleeping on a hard high school floor.

It is hard to live on this island and not get swept up in the excitement, and the traffic that the loppet brings.  Our Swedish dream house is located a couple miles down the road from the start line for the two larger races.  I enjoy watching it's transformation in the week leading up to the loppet.  This year that was a very rainy week.  Luckily on Saturday, there was a break in the rain, and although the sun barely shined all day, and there was a nip in the air, the rain held off.

I briefly considered avoiding the crowds and staying home all day, but instead I piled KC, and Beanie on our bikes and took a 2 mile bike ride from our house to the start line. 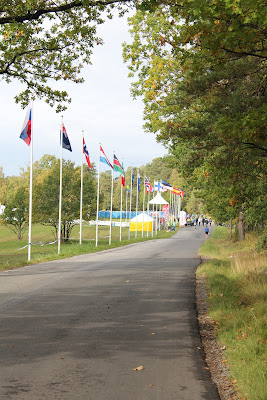 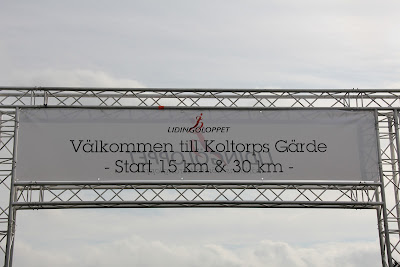 In my desire not to miss the race, I ended up arriving early.  So we had some time to meander, and soak it all in.  Here we see part of a Swedish breakfast of champions, chocolate milk, and coffee.  No need to waste money on expensive sports drinks when a little sugar, fat and caffeine gets the job done. 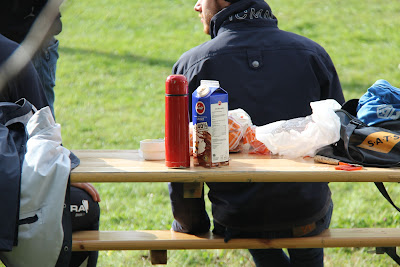 This field, less than 8 weeks ago, was the summer pasture for about twenty horses from the islands riding school.  So all the tents, the flag poles, porta-potties, and sound systems electrical feed are assembled in the days leading up to the race.  The race has three locations, and the one closest to our house is the 30 and 15 kilometer races.  They finish line is at another field a few miles walk from this one, and in between there is the registration and vendors area. 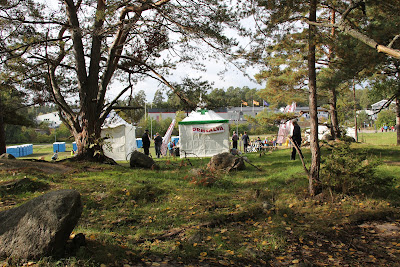 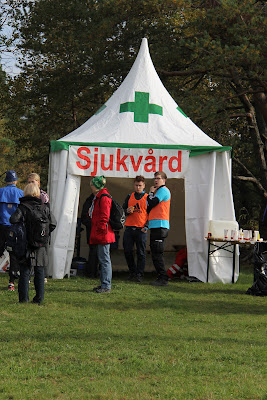 While we wandered, we had the pleasure of bumping into one of KC's teachers from her school.  She was with a friend who was running  in the race.  She told us that last night there were runners sleeping at KC's school.  She also pointed out some girls, maybe 9 or 10 years old wearing turquiose t-shirts.  She told us they were from the figure skating school.  She explained that in order to manage sheer magnitude of the race all the clubs on the island volunteered their members, and time to help. 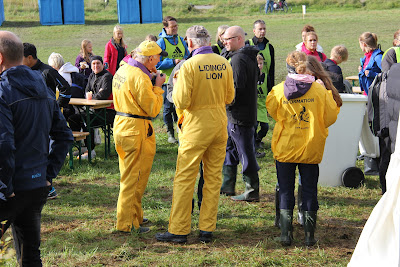 Volunteers from the Lion's Club

We watched as a John Deere tractor pulled trailers into a row across the field. 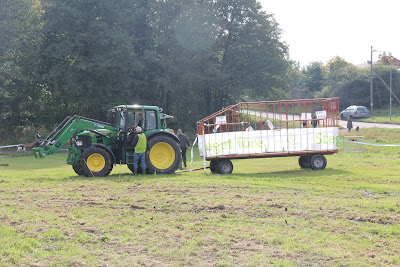 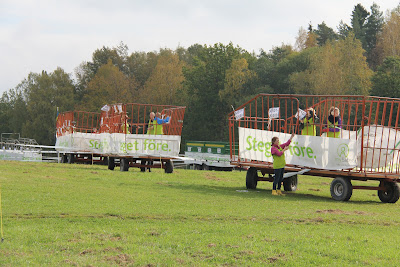 We soon realized that they were for the runner's gear bags.  Each trailer had different start group's numbers on it.  After the first seeded group starts, other groups line up and start at 10 minute intervals.  Runners are seeded based on previous years results and each race group seemed to have 200-300 runners.  After the group starts the trailer with their bags are picked up and tractor driven to the finish line. 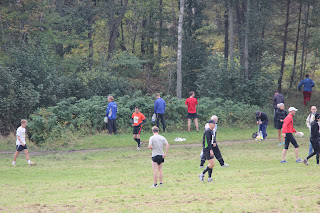 As we waited, you could feel the anticipation building, and we had time to observe the pre-race prep of the runners. Lots of jumping, lunging, and short jogs.  Above you can see the 30 person deep porta-potty cue, being avoided along the wood line. I guess the coffee had to end up somewhere.  I have to hand it to the Swedes, they miss very little opportunities to commune with nature.  We also observed this man. 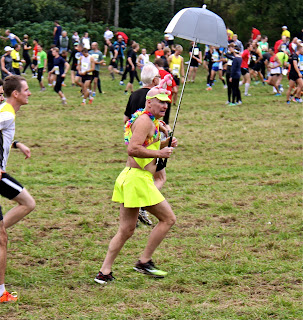 I assured Beanie that while he was not going to run the race in a neon skort, leis, and an umbrella. He looked close to seventy so we figured he was just there to get the runners pumped up.  After some warm up aerobics that were lead by a Swedish man who had almost as much enthusiasm as Richard Simmons and his two lovely assistants. That is them up on the bandstand. 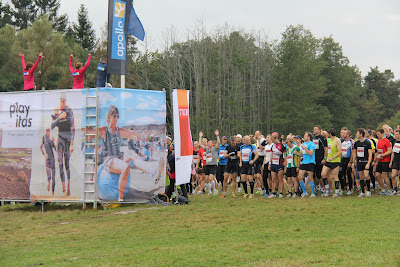 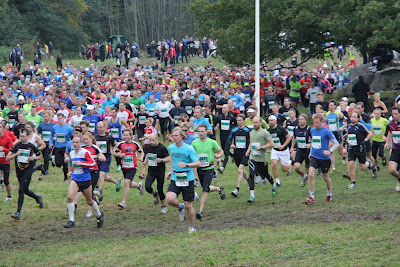 On our bike ride home we intersected once more with the runners as they came out of the nature preserve and crossed the road toward the driving range/ski slope. 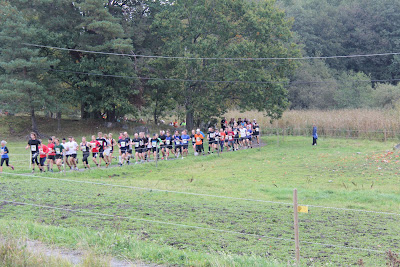 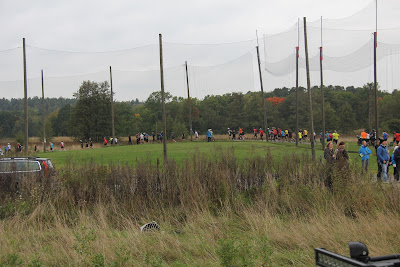 Oh and guess who else we saw still with umbrella in hand? 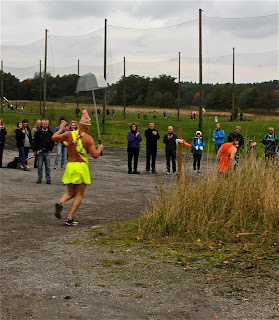 Guess I was wrong about him, but how crazy and dedicated a runner must one be to carry and umbrella for 19 miles through the woods?  He was also seeded in the first group, so he must have had a pretty good time last year to make the cut.  Impressive.  I'm not just saying that because he's wearing a skirt.

Tomorrow,  the Lillaloppet is for kids ages 7-15 and depending on their age they run either , 1.7k, 3k or 6k.  For those, like myself, who don't naturally think in metrics, that is 1 mile, 1.9 miles and 3.7 miles. The kids races, like the adults, are run through the woods on either dirt or gravel paths. There is even a 'fun run' for the youngest the Knatteloppet for children 6 and under.  That course is 1.7k.  See right there.  That's how you know you are in Sweden and not the states.  Cause seriously what American's would ask their 4 year old to run a mile 'for fun'?  I mean, I'm sure it happens in the super jock athletic families, but in Sweden similar cross country mile that we moaned about being required to run in middle school, is deemed totally appropriate and 'fun' for preschoolers.

Tomorrow we won't be participating, although after today, Beanie and I decided that next year, if we still live on our island, we would do one of the shorter runs.  If for no other reason than to feel apart of and event that makes Sweden, and our island so special. 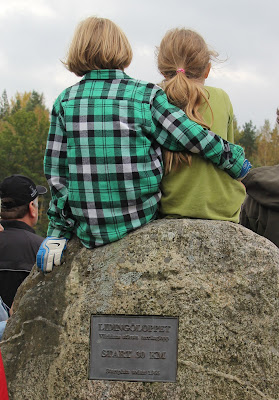 Posted by humblemumblings at 6:24 PM